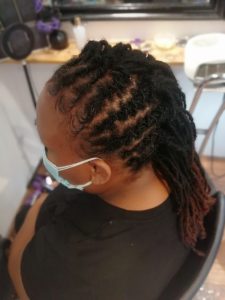 Why does the sight of the afro hair invite uncomfortable conversations with negative connotations of punishment and repression? As if to be black and born with afro hair is wrong. It has always been a topic of conversation without any regard for a person or people’s feelings.  White people and all non-black people are so fascinated by the uniqueness that it compels them to step out of character and act in a weird manner demanding to know all sorts of quite offending questions.

I have been asked a few times ‘do you wash your hair?’ Or ‘is it hard to wash?’ Etc… ‘like is it hard to wash?’ Doesn’t everyone use their hands and shampoo with a rotary of effleurage movement technique! Anyway, it happens, yes those awkward times, when as a black person you accept it and move on because if you don’t you are stereotyped as the angry black person!  With the Afro or Locks who they deemed as a rebel back in the days!

Black people have always been creative people and have been doing dreadlocks and braiding hair for centuries. In, 1619 when the slave trade started it changed everything.  The slaves didn’t have access to their natural resources and had to improvise and use whatever they could get that simulated what they’d been using back home.  Being slaves in the eyes of the slave owners, their hair was a constant issue taking time to care. For the slave owner, this must have been a waste of their demanding and forceful free work time. So they would often shave the heads of the slaves.  Locks were forbidden as they probably found that these were the slaves that regularly ran away.  They were eventually allowed to braid their hair as this gave them a tidy appearance.  This eventually became a genius plan of escape, as the women that were allowed out would memorize their routes and braid maps into their heads and in the men’s hair. 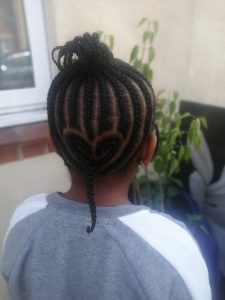 Braiding hair was an expressive way to show off talent through styles.  As well as a form of protection for the hair especially when sleeping at night to avoid sleeping on it and the curls tangling and intertwining preventing it from a more difficult task of combing the following day.

Eventually, the hot comb was created and it was more accepted to present the Afro hair in this way, slave masters would show off their slaves representing how well they were kept.  Much the same way as white people would take pride in the grooming their dog to and parading it around.

The constant hot combing of the Afro hair led to the innovation of the relaxer in the 1950s which was a lethal chemical substance that permanently straightened the hair until the roots grew up.  This product still sells to this day but is very damaging for the hair and the scalp often causing reactions leaving burns and scabs which lead to eventual permanent hair loss and scarring.

Not just physical and visual scarring, this also leads to psychological scarring, damaging self-esteem, and confidence.

The journey a black woman has to go through with her hair is quite compelling, and one which only another black person can fully understand.  It is a journey that brings you through so many unnecessary situations and conversations taking up valuable time in your life and leaving you with unnecessary thoughts and feelings that you have to correct and reassure yourself with positive affirmations if strong in the mind.  Unfortunately, we have a high proportion of people who are not comfortable in their God-given beautiful hair for whatever reason and there are many,  opt for various forms of extensions.  The range of styles is vast. It shows how diverse and creative we are on all levels when it comes to hair.  One texture of hair can be set and transformed into many different textures and different curl patterns. 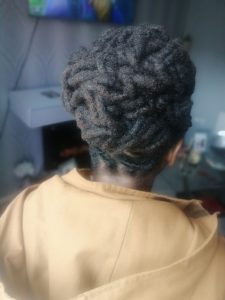 Black women and men have also had to endure the scepticism and scrutinizing of comparing textures of hair. With it be known and even documented as having a strain of European or Asian in one leads to the common term ‘good hair’. So once again a method of divide and conquer was adopted by separating the darker slaves from the lighter ones and then separating due to hair textures leading to the slaves with a looser curl pattern getting preferential treatment.  Hence why they were also the first to be educated out of the divided slaves.  Scorning the darker slaves with coarser textured hair, creating division, distrust, and all sorts of moods for these slaves on the plantations.  They lighter slaves with softer hair were promoted to the house and classed as house slaves making them believe they were better than their counterparts. A lot of times this meant them turning on their mother.  As slave owners would impregnate a slave regardless of her having a partner.  It was probably a part of the degrading of the black man and why a black man takes pride in enjoying a white woman to this day, in hope that he is satisfying her sexually better than any white man could.

This Willie Lynch theory put into practice still exists to this day with darker skin people often feeling inferior to lighter skin people or less attractive causing them to use harsh chemical creams to bleach their skin to change their complexion to a lighter tone.  With the lighter people being first educated they became the ones more likely to get a job after the abolition of slavery, and their shade remained preference for certain jobs to this day.  So there are very complex issues surrounding black people not only with complexions but in hair textures also.  We’ve all heard Beyonce singing about ‘ Becky’ with the ‘good hair’, referring to a girl that has a different textured hair from hers which she obviously  considered the good hair in comparison to her more tighter curled afro.  So there you see it! Even mentioned in a song in a form of jealousy un subconsciously because we have been programmed to believe what is good and what is bad from conditioning from our peers to dehumanize, unintentionally.

The journey of black hair or the Afro hair not to mention the Rastafari movement and struggle, has been very long and continues.  With the recent court case of Chikayzea Flanders battling for not being allowed to wear dreadlocks to school.  Also the case of  Ruby Williams for wearing her afro hair to school and being told it breached policy which stated that the afro hair must be of reasonable size and length. Both cases resulted to a win which were ground breaking and land marking cases, giving us all hope that one day the black hair will not be an issue or a topic it will just finally be able to just be.

Mogul Beauty: OLVERUM Is Pure Luxury In A Bottle!

FrOtober: A Stand Against Discrimination

So You Want To Be An Influencer?