Lyrica Anderson is a singer-songwriter with an impressive track record. From writing for our favourite artists, starring on a hit tv show, releasing new music and raising her adorable son Ocean – calling her a superwoman is an understatement.

Lyrica started singing from the tender age of six years old. The singer recalls when her mother was signing in the car and asked her to sing along with her. To her mother surprise Lyrica naturally had a beautiful singing voice. Her Mother Lyrica Garnett was shocked she had to call her friend to tell her the news. 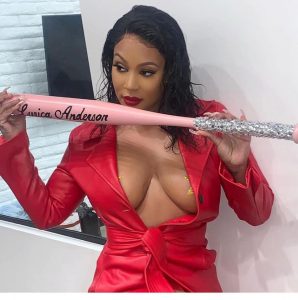 By the time Lyrica reached her early teens, she had started writing songs. Although a newbie, her mother would help her by getting her instrumentals. Melodies would come to Lyrica effortlessly making the songwriting process relatively easy. Not too long after she got her first songwriting deal with corporate giant Disney. Signing the deal with Disney was a significant move for Lyrica and securing the young writer her first big cheque, further encouraging Lyrica to take her passion for songwriting seriously.

Disney was so impressed they got Lyrica to write for all of their top acts, such as the Jonas Brothers, Miley Cyrus, Princess & The Frog, Camp Rock, and more. The more placements she landed for the Disney acts, the more her confidence and talent would grow.

By the time she reached her early twenties, the phenomenal writer had decided to explore the RnB route and write songs Chris Brown, Demi Lovato & others.

“I was excited to work and be in the studio with Chris Brown. I got the chance to record with him, watch him in the studio. He would ask me what do I think of that run or that line?”

Lyrica looked up to Chris since he first exploded on to the scene with his break out hit ‘Run It” featuring Dipset’s Juelz Santana. So you can imagine her excitement when the opportunity to work with him came. Lyrica recalls vocal producing and writing for Chris Brown a surreal experience.

“Chris Brown is a superstar and so talented.”

Another highlight in Lyrica’s songwriting credit was to score a song for music phenomenon Beyonce. Although Lyrica had not met the megastar at the time, she co-wrote the hit “Jealous” in the studio with her producer. The song eventually got sent to Beyonce, and she loved it. Beyonce wrote on the piece too, making the track a collaboration.

“She’s the Queen Bey! To hear her sing my song, I cried. I was super excited. I finally met her a few months back at the Roc Nation Brunch.” 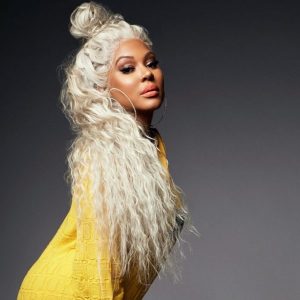 Over the years, Lyrica has built up strong connections and long-lasting relationships with many in the entertainment industry. Some of her A-list pals include music and beauty mogul Rihanna, Princess Love, K-Michelle and more.

Lyrica attributes her success in the industry to working hard and never giving up. Not even the pandemic has slowed down her work output. With the release of her new album coming soon and new singles ready to be rolled out, Lyrica and her management team work 24/7 to ensure the best. Lyrica knows hard work and determination will reap her the rewards she is capable of achieving.

“Sometimes I am up until 5-6 am on the phone, sending emails, answering text messages, responding to people, sending information, files, artwork, pictures they need just being hands-on. Editing with my editor, making sure it looks right and that I like it.”

I watched Love & Hip-Hop, so I saw first hand what Lyrica was going through in her private life. Her new single “Marriott” heavily touched on the situation with her and estranged husband A1. Being so transparent with the matters close to her heart must not have been easy, especially when you got the whole world watching. I commend Lyrica for her honesty, wearing her heart on her sleeve and baring her deepest emotions can be freeing, but it’s not always a pleasant experience.

Listening to your latest singles, I can hear your life experiences inspired your creative process?

Lyrica: My last two singles called ‘Marriott’ and ‘Act A Fool’ relate to my life because I put it all on paper. This whole album I laid it all out there you know me and my partner have separated, I went and stayed at the Marriott hotel I moved out, I just had a baby.

I feel like in pain; you get the best music, which inspired me to write Marriott. Act A Fool is a new chapter, it’s like throwing your hands up and saying you weren’t on your p’s & q’s, so I’m about to turn up at all costs. I’m not thinking about you. That is where “Act A Fool” comes from.

Your songs are super heartfelt and relatable. Does it seem like men can pick the worst times to act a fool?

Lyrica: That’s exactly how it is. Its the worst time to be acting a fool, women go through so much when we have children. I didn’t want to believe I was going through postpartum depression, but I think I was.

I’m starting to feel back to normal now my son is 18 months and I’m just starting to feel like me again. It takes a lot out of you. There’s no guarantee of how you will feel. It’s a weird feeling you don’t feel like yourself. I mean, I’ve never felt like I didn’t want to be next to my baby. I’ve always bin loving on him and obsessed hugging him and being there for him that was never the issue I just felt sad.

It just takes a long time to feel like yourself again. To lose your baby weight, and get back into workout mode.

“Women are so much stronger than we know. I’m very team female, team women we need to try and stick together; we’re in this together.”

That’s where my concept of music is right now it’s not ‘F’ men because there are some good guys out there, it’s just when you are tired of the bull crap you are ready to make a change.

It doesn’t mean that you won’t get back with that person or you won’t work it out. Maybe they will learn a lesson from your distance because sometimes when you’re right up in people’s faces, they get too comfortable. 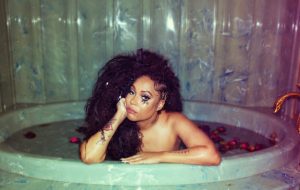 You released your beautiful song “Marriott” and followed it up with the sensational “Act A Fool”. The melodies, lyrics, harmonies, and arrangements are literally out of this world. Can we expect an album anytime soon?

Lyrica: Yes, I don’t have a date yet; I’m not in a rush. I’m currently really focused on Act A Fool as a single. Just pushing that, an album will definitely be coming soon.

What is the biggest challenge you have had to overcome as a professional singer?

Lyrica: One of the biggest challenges is I always try to out-do myself I feel like I am my competition. This time around, I want my songs in the charts, I am ready to go platinum and gold. My streams are doing great. I pray that everything keeps growing and building this is the hardest I have probably ever worked on a project of my own.

I used to put up one post on Instagram then post some pictures; I would stop promoting it. This time around, I am very involved with my team regarding promotion and content. I had a Tik-Tok trending dance video for Marriott. 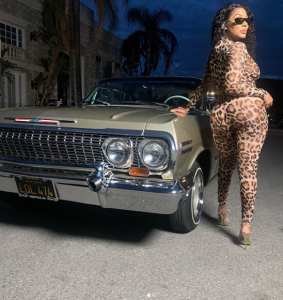 I believe you will God is so good, it will happen for you.

Lyrica: You better talk about God. God is great! Amen.

If there was one song you wish you wrote, what would it be and why?

Lyrica: I was in love with “Jealous”, but it was for Beyonce. I wrote a song called “Pretend” for Tinashe. It was a substance record that I could connect with; I loved it so much I could listen to it all day.

I would keep listening to my demo and sing it all the time. I was really in love with it, that let me know when I did this project I wanted to talk about real things.

What achievement makes you most proud?

Lyrica: Having Ocean, I’m most proud of having my son. He is truly a blessing. I used to say I did not want kids I was secretly terrified of having children. I never wanted to tell anyone, only my mum knew.

If I had a bad headache or felt ill, I’m like a big baby. I always thought it’s not for me, or I’m not strong enough. He’s so adorable and amazing. In the morning, the first thing he says is mamma and kisses me on my face. He’s affectionate, always giving hugs and kisses and he likes to play.

It makes me think, oh my God, look what I would have been missing. I’m so happy, I understand now. I can’t quite grasp people having five or six kids because it’s a lot of work. Ocean is three in one, but he’s my biggest accomplishment in life.

I did not know true love until I had my child. I thought I would have another child now she’s about to be 10, I haven’t gone back because it is such hard work.

Lyrica: Yeah, that’s what I feel. I thought about it like, maybe when Ocean is two I would have another child but that’s in six months.

I don’t know how women do it the two years go by too fast; it’s practically the same as back to back. I’m just starting to feel normal. I feel like I was pregnant yesterday, it’s a lot of work.

It’s hands-on, I get help so I can switch off and have some hours to do my work, right now we’re on a Zoom call if he were sitting right here he’d be like mama toy’ there’s no way we would get through the call. It’s good if you got family members or your mum to help so you can get some work done. Having two children, I couldn’t do that right now.

What are you passionate about outside of your music career?

Lyrica: I’m getting ready to do a skincare line and lipsticks again. I plan to do cosmetics. People always ask me what do I use on my skin? So I’m going to launch my skincare line. I’m passionate about things like that I enjoy.

How is it as a cast member on Love and Hip-Hop?

Lyrica: Its fun going to do my make-up and going to filming, but it can get stressful, not knowing what you are walking into every day. I could be having a great day feeling good looking cute, thinking I’m going to meet up with a girl I’m cool with, then some other girl walks in, and she got a problem with me that I didn’t even know about. That can throw you off.

You will be like’ hey what are you doing here, and the girl will be like I’m mad at you for something you said four years ago. I would let them know I didn’t say that and they are like I don’t believe you. I would leave with a migraine, so I am happy to be focusing on my music right now. 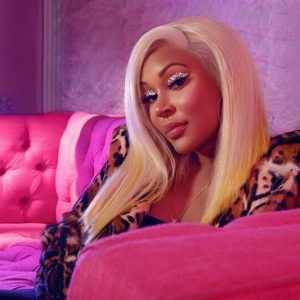 Can you share a nugget of wisdom for aspiring singers and songwriters?

Can you tell us something the fans don’t know?

What can we expect from you over the next year?

Lyrica: Lots of great music and more great videos. Lots of surprises coming for my fans all over the world.

Mogul Magazine: Where can we find you online?