Girls and women inspired to try out a tech career on Ada Lovelace Day!

On Tuesday 8 October, SETsquared Bristol and Engine Shed were delighted to host their second ‘Inspiring Women and Girls In STEAM’ event, in celebration of Ada Lovelace Day.

Ada Lovelace, a 19th century mathematician, is widely credited as the first computer programmer, and best known for her work with Charles Babbage to develop the ‘Analytical Engine’ computer.

The event saw a packed diverse audience, including schoolchildren, come together to listen to a panel of women in STEM (Science, Technology, Engineering and Maths) talk about their careers to date, ranging from data visualisation to scientific computing. 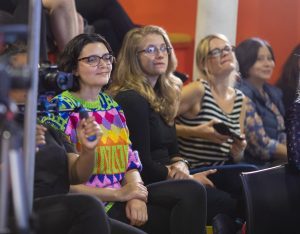 Hosted by SETsquared Bristol Centre Director, Monika Radclyffe, the panel was comprised of three SETsquared members: Angela Loveridge Founder of Cyber Scholars, Helen Lloyd Co-Founder of Xavier Analytics, Helen Tanner CEO of Data Cubed, as well as Natalie Thurlby from Jean Golding Institute, University of Bristol. They were asked questions ranging from how they got into coding, what barriers they faced and is gender diversity still an issue in this sector?

Their stories illustrated that they all came into coding in different ways and times, from at school and university to work, showing that it is never too late to start a career in technology.  When asked about the challenges they faced to get into technology, Angela said her careers advisor at school had told her to aim lower, despite having a natural aptitude for computer science. She thankfully didn’t take that advice and said to the audience that “If it comes naturally and you’re enjoying it, just do it – or someone else will.”  Helen Lloyd also spoke of how her dyscalculia (numbers dyslexia) had not stopped her learning coding.

Natalie described coding as “the closest thing to magic” and advised the audience to “surround yourself with inspiring people”.  All felt that diversity in the sector was improving in and attitudes are changing.

The event concluded with the panel giving advice on how to get into technology, ranging from joining local coding clubs to experimenting at home with build kits. The key was following your passion if you enjoyed technology.

Paul Foster, Community Manager at SETsquared Bristol, said: “We are really happy to have collaborated with Engine Shed to celebrate women and girls in STE(A)M on Ada Lovelace Day. SETsquared Bristol have an avowed commitment to equality, diversity and inclusion, and love to inspire new entrepreneurs – young and old. It’s important that we all continue to celebrate and encourage women in technical disciplines every day, not just on this one day each year.”

Apprenticeship and training providers boomsatsuma, DevelopMe, Mayden Academy  and _nology, were at the event to meet with people interested in a career in digital or coding.