A one-act play set amidst the political backdrop of the 1960s Civil Rights Movement, One Night in Miami was written by Kemp Powers in 2013, and is now being revived by Matthew Xia. The play is a dramatic imagining of what took place the night four larger-than life figures came together in a Miami motel room during an era fraught with racial tension and political insecurity. 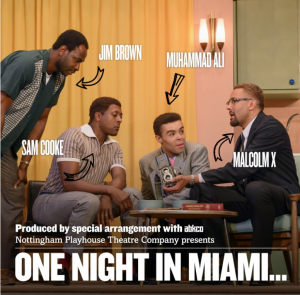 On the 25th of February 1964, after beating Sonny Liston for the world heavyweight boxing championship, a young, cocky Cassius Clay – on the eve of becoming Muhammed Ali and announcing his commitment to the Nation of Islam – returns to his Hampton House Motel room, hyped and ready to celebrate his victory with friends. He is joined by singer-song-writer and entrepreneur Sam Cooke, American football player Jim Brown, and human rights activist and civil rights leader, Malcolm X in what will be a pivotal evening for all involved. It is in this small motel room where the four men go head to head in a series of heated  discussions about race and racism in America and the most effective way to tackle it.

What starts out as a vivid and boastful commentary of Clay’s recent victory soon descends into round upon round of fraught debate and confrontation as the four men, armed with experience and ego, throw verbal punches at one another as they struggle to decide how best to fight the oppression of racist America, addressing such issues as integration and assimilation, black ownership and group economics, the representation and perception of black bodies, and the development of black nationalism in the US. In turn inspired and defeated, enraged and amused, each expresses their fear, pain and regret at the world around them and their hopes for its future.

Although fighting the same battle, the characters are very different in their personalities and approach, with each one providing a unique perspective and plan of action. Cassius Clay, young and naive and at the peak of his career, brings confidence and a youthful optimism that often borders on naivety, as he struggles with his imminent decision to become Mohamed Ali and join the Nation of Islam. While Jim Brown, another world-class athlete with a far more realistic worldview and a quiet yet sharp intelligence that is revealed over the course of the play, has become disenchanted with his success having learned that it provides no protection from the injustice and oppression of a racist society. Malcolm is relentless as he aggressively challenges the others and their commitment to the cause, with the majority of his efforts being directed at Sam Cooke, whom Malcolm accuses of pandering to white audiences. Yet despite constantly being on the defensive from Malcolm’s attacks, Cooke gives as good as he gets, providing some much needed humour and a calming, almost feminine energy in a sea of masculine bravado.

Despite such clearly contrasting personalities, these men have more in common than it may at first seem. Obviously successful black men at the peak of their careers, more importantly, these men each find themselves on the brink of major shifts in their lives. 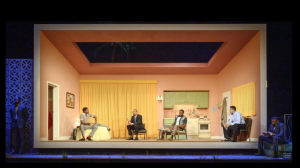 Clay and Malcolm, while at very different stages of their lives, are both undergoing extremely impactful personal and spiritual transformations, that will not only affect them, but the world around them. While Brown and Cooke, opposites in so many ways, make decisions to take their careers in new and history-altering directions. As the play reaches its climax, the four reflect on their careers, accomplishments and influence, as they struggle to make decisions that will play a pivotal role not only in their own individual lives, but in the course of modern history as well.

Conor Glean gives an animated and enthusiastic performance as Cassius Clay, darting around like he’s still in the ring – bobbing, weaving, bragging, and constantly reminding us how pretty he is. Miles Yekinni’s sober and prudent depiction of Jim Brown offsets Glean’s energy nicely, while Christopher Colquhoun’s calm and provocative Malcolm X brings a sense of balance to the group. Matt Henry rounds out the ensemble, while at the same time stealing the show with his vibrant performance and soulful renditions of Sam Cooke classics that punctuate the act and show off Henry’s incredible vocals. While the individual performances are superb, it’s the chemistry between the characters that make this ensemble such a dynamic force. 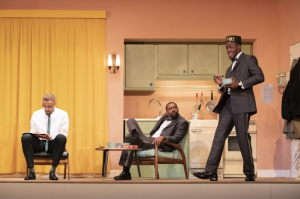 Powers’ play is informative as well as entertaining, with thought-provoking electric dialogue that brings the atmosphere of the 1960s right into the motel room, providing a poignant insight into the struggles of African Americans. And with themes and questions that are just as pertinent today as they were back then, Xia couldn’t have chosen a more relevant time to bring this masterpiece back to the stage.