The official trailer for the new Harriet Tubman biopic Harriet was released on the 23rd July 2019.

The film is set to tell Tubman’s get away from slavery and how she helped free many others who were captured and enslaved. Harriet debuts November 1. 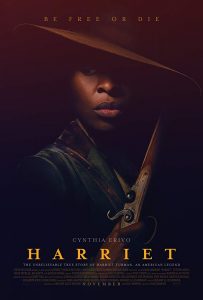 I am over Slave films but I have to admit this one is a story I would like to see. Harriet Tubman is a Hero to African’s living in the diaspora. She fought to free herself and hundreds of other enslaved Africans in America. Tubman knew the consequences of her actions would be death, but that did not stop her. She was determined to use her life for good and help those who so desperately needed her help. More importantly, she was willing to die fighting for her people.

The trailer for the biopic Harriet looks intense. It’s set to recount to the genuine story of Harriet Tubman, a run away slave turned-abolitionist who was in charge of driving an expected 300 captives to opportunity utilizing the secret system of the Underground

Railroad. Tubman will be played by the Tony Award-winning Cynthia Erivo.

“I trust I make you proud!!!” Erivo tweeted. On the off chance that her two-year spell in Broadway’s The Color Purple is any sign, we’re certain she will. Furthermore, the entertainer as of now has an Emmy and Grammy. In the event this job wins approval from the critics, the 32-year-old could well be en route to joining the elite group of EGOT champs.

Harriet is the significant movie chronicling Tubman’s story since Cicely Tyson depicted her in 1978’s A Woman Called Moses. Because of that, we can hardly wait to experience how this bit of American history will play out on screen in 2019.

After her outstanding depiction of Celie in Broadway’s The Color Purple, Cynthia Erivo will now play Tubman. The U.K. entertainer commented on the good news with a passionate Instagram post.

“I wish I had the words to portray what it feels like to carry this to you,” Erivo composed. “I’m appreciative to have been a piece of the recounting this story and I trust I will have done right by you come November first. I put my blood, sweat, soul, heart and attacks it since it merited nothing less. All affection Xx”

“I’m so energized, lowered, propelled and profoundly thankful to be on this adventure, with such particularly capable individuals. More to come!” director Kasi Lemmons tweeted in 2018.

The biopic will detail Tubman’s story, starting with her 1849 getaway from slavery in Dorchester County, Maryland, as she went on the Underground Railroad to opportunity in Philadelphia.

En route, she meets abolitionists like Frederick Douglass and Odom Jr’s. William Still who helped support her on her journey to freedom. What is most heart-warming and courageous about Harriet is that once she was free she put her life on the line to help the enslaved escaping the savagery of the South—a powerful demonstration that solidified her name in the history books as a courageous individual in the early Civil Rights movement.

Harriet Tubman – we salute you!