The fashion world is buzzing with reports that megastar Rihanna has secured a major deal to back her in a fashion brand. This deal will officially make her the first Black female designer to join the world’s largest luxury conglomerate LVMH, parent company of Dior, Fendi, & Givenchy.

Rihanna is yet to confirm the reports but sent the internet into overdrive after she was spotted rocking a pair of Fenty sunglasses.

Rihanna is a fashion icon and is well known for setting many trends. When Riri colours her hair you can bet your last pound that particular dye colour will be sold out of stores. Although she has been busy dominating with her brand Fenty Beauty in the make-up industry Rihanna has millions of fans and fashion influencers all dancing to the tune of her beat.

The thought of Fenty teaming up with LVMH is literally what dreams are made of and is a clear indication of how much power and influence celebrities like Rihanna really has when it comes to leading in pop culture. 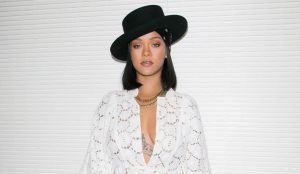 There are many fantastic designers in the world but we can see why fashion powerhouse LVMH would put their money on Rihanna. She is undoubtedly one of the most influential and successful singers under the age of 35 in our generation. It’s known that Rihanna has no formal fashion training but what she has in abundance is a clear vision for her own image, complemented by her impeccable taste for fashion that is ahead of the current trends. With many No. 1 singles and countless Top 40 hits, Rihanna has the power to disrupt the present state of affairs.

With there being calls for more diversity across the board and in a variety of industries. This bold yet profitable move for LVMH shows that they are aware of the turning tides, opting for more diverse leaders and influencers to have a well-deserved seat at their elite table. Rihanna is still young and already has an impressive track record under her belt when it comes to successful business ventures. We are sure LVMH can see that the Bajan bad gal is the way to go.

While a lot of artists turned designers opt to go full steam ahead with fashion, many of whom shut out their past musical efforts. Rihanna, on the other hand, has managed to build an international personal brand that effortlessly expresses her creativity through a variety of mediums without taking away from musical roots.

We still have a lot of questions regarding which direction will her fashion brand take. What will the brand be called, who will be the primary customers, how involved will LVMH be in the overall structure?

What we do know is whenever the news is officially announced and launched Rihannas fashion brand will go far beyond the often closed off fashion world.

Rihanna must have the Midas touch because everything she touches literally turns to gold. If this isn’t a dose of some serious Black Girl Magic, I don’t know what is! We couldn’t be happier for the Bajan beauty.