Cardi B first caught my attention while I was indulging in my weekly dose of pleasure watching the colourful, drama-filled entertainment show Love & Hip Hop.

She was loud, funny, crazy, but most of all she was relatable. Her girl next door demeanor coupled with her insatiable drive to be a star was nothing short of inspirational.

After 2 years of being a key member on Love and Hip Hop New York, and being a cast favourite among fans of the show Cardi decided it was time to explore new ventures and solely concentrate on her Hip Hop Career.

The mixtape featured club hits like ‘Foreva’ & ‘Pull Up’. It became clear that Cardi took her career very seriously and does not play when it comes to her music.

The release of Bodak Yellow was the moment that changed Cardi’s life. The song instantly made Cardi B a household name but she also quickly learned that fame does not always bring happiness. Cardi has always been an open book. She embraces her past and does not pretend to be something she is not. There is no shame in her game. Her approach to owning her truth is refreshing and she certainly does not let anyone hold it against her.

Being so vocal has opened the doors for people to publicly attack Cardi B and she is not missing from the list of epic celebrity feuds. Her biggest feud to date has been with Rap’s reigning Queen Nicki Minaj (and the barbs). Now, we all know that if you come for Nicki the barbs will attack for days on end. Cardi is not one to hold her tongue so things often get heated rather quickly.

After the release of the Motorsport music video with Migos and Nicki Minaj, the internet quickly pointed out that Nicki and Cardi did not film any scenes together. The internet turned on Nicki insinuating she was bitter, shady and a bully for refusing to film with hip-hop’s new princess.

On Friday 8th September during the Harpers Bazaar New York fashion week party it all came to a head between Nicki and Cardi. Cardi B allegedly went after Nicki for a variety of shady tactics behind the scenes.

Azealia Banks has publicly attacked Cardi on numerous occasions and most recently sent a scathing yet intellectual shot at the rapper accusing her of appropriating black culture for money and fame. Cardi didn’t give Azealia Banks too much energy and replied with a dignified response. Way to go Bardi! 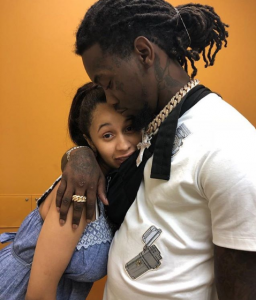 I Turn Offset On!

Now we all know Cardi loves her some Offset, A member of hip-hop supergroup Migos. Offset and Cardi met in 2016 and started dating shortly after. Being in any relationship is hard enough and being with a super famous celeb comes with a set of trials and tribulations which are in a league of their own.

Their passionate romance has been clouded with cheating allegations, fake side chicks and crazy women pretending to be baby momma’s. Through it all, she has decided to stand by her man stating that “Men will cheat no matter which man she chooses to be with”. Cardi is no fool and like Beyonce told Jay Z, she told Offset “if you cheat again you gon lose your wife”. 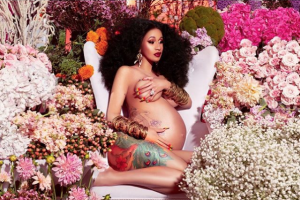 On 10/7/2018 Cardi and Offset welcomed their beautiful baby girl Kulture Kiari Cephus to the world.

After months of speculation, Cardi B revealed that she was pregnant on Saturday Night Live with Jimmy Kimmel. Soon after Cardi and Offset let the world know that they had already tied the knot back in September 2017.

The new mum was set to go on tour with Bruno Mars but since havinng her daughter Kulture and realising the time it takes to heal, bond and enjoy being a mother Cardi made the decision to stay with her child and not rush back onto the stage or spotlight.

We have to admit we are happy and excited for what the future may hold for the Bronx born princess. Her rise to fame and fortune is nothing short of a modern-day fairytale, she works very hard and always does her best.

She is still new to the entertainment industry and relatively young in age so she is still growing and learning to navigate in such a complex and demanding environment.

With a plethora of endorsements and deals on the table, a happy family and high flying career we know Cardi will continue to shine and rise to new heights. We wish Cardi, Offset and Kulture nothing but happiness, prosperity and more success.

Mogul Beauty: OLVERUM Is Pure Luxury In A Bottle!