Hip-Hop Star Teams Up With The Legendary Snoop Dogg!!

“I’m feeling an excitement I’ve been longing for,” proclaims hip-hop artist Steven Malcolm as he reflects on the release of his third studio album ‘Tree.’ “I just put out a body of art that I’m so proud of. I feel like I created something special that will be here for lifetimes.”

The story of Steven Malcolm is truly fascinating. It’s not your ordinary, ‘I always wanted to be a performer’ tale. Steven Malcolm has lived and naturally found his way to music. With ‘Tree’ out in the world, Malcolm is keeping busy by growing his engagement and taking his career to the next level: “I’ve learned that I want and need to start taking my craft to the next level, so I literally have been learning more about creative roll-outs and what they actually mean for the body of work. I’ve been back heavy on social media and engaging with the fans. The pandemic gave me too much time off and to myself lol now I’m giving myself back, so I’ve been prepping”.

It seems like ‘Tree’ is jump-starting a new era for Malcolm, as previous releases such as his 2017 self-titled album and 2019 album’ Second City’ were the encapsulations of his learnings, but ‘Tree’ captures more of the mature Malcolm, as a father, husband, an artist with a clear vision. He elaborates: “In my early work, I was learning. Music was never my dream growing up; even as a teen, I didn’t see rapping as a thing at all. So a lot of my story is about living and learning, unfortunately. God said here you go, steward well lol! Now I know my WHY, now I know my mission and vision very clearly, and TREE is the beginning of the lived and learned Malcolm”.

Everyone’s present reflects their past, mistakes, and learned lessons. For Steven Malcolm, he remembers a few pivotal moments that set him straight and showed him what the right direction entails. At the age of 19, young Steven walked into a hip-hop church in Grand Rapids called The Edge, and his life forever changed. He was surrounded by people who looked like him and sounded like him. Stunned by the glory of God, Malcolm has dedicated his life to worship. 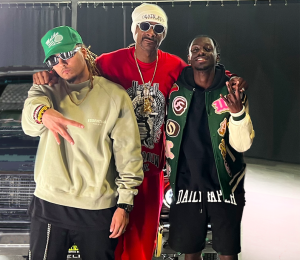 Since then, Steven Malcolm has used his talents “to inspire young people who are from where I’m from and those who have walked a similar path.” With the release of his newest project, ‘Tree,’ Malcolm signifies his purpose, his desires, and beliefs. He describes: “The core of TREE is to show the world what happens when you root yourself in what you believe. I think about when I took a year to root myself in God and how I took up my cross, and the old me died. Tree is about being so deeply rooted that your foundation can never be shaken, and your actions begin to produce fruit for the world. This album is more so focusing on my fatherhood and life at the moment. There are some reflecting moments but still mostly all relevant to recent times.”

Other hip-hop artists would get sucked into the wealth and get distracted by the luxury new lifestyle; Steven Malcolm is grounded and inspired by the people and city that shaped him into the person he is: “My family, my city, my church. I find my son to be the main source of my inspiration nowadays. My beautiful wife makes me move like a king, and I have a city behind me that believes in me and, most importantly, a church that prays for me.”

The leading single is Malcolm’s collaboration with the West Coast king Snoop Dogg on the future summer anthem ‘Summertime.’ He describes it as an absolute pinch-me moment: “Every time I sit and look back, it’s like, yo did that really happen? I will never forget what he said to me on set, he said “This record is hot, this is good music. Great music makes moments like this.” That whole night was like a movie for me. We linked up because he heard the song and wanted to hop on, so my A&R dude reached out and got his verse the next day”.

Working on new music, Steven Malcolm manifests a ‘personal legacy’: “I want to show others, it’s okay to be YOU! The next level is approaching, and I’ve been through a whole lot to get here. God is about to be magnified like never before”.

Stream ‘Tree’ out now on all streaming platforms.