The time has come. Only a few days away from releasing his solo debut album ‘Believe It,’ Maddox Jones is ready to show everyone what he’s got. After a career of playing in other bands and collaborating with artists, Jones describes it as ‘a natural progression’ to venture out as a solo artist.

Having a career kick start supporting icons like The Killers and Placebo, Maddox Jones is ready for new ‘pinch me moments’ as a solo singer/songwriter. Before he delves into his past and the road that got him where he is today, Jones expresses a strong commitment to his craft in anticipation of the ‘Believe It’ release: “My main intentions are to show up every day in service of my music and my fans and do push myself to the limits of what I can achieve as an artist. I’m really proud of the album I’m about to release, and I can’t wait to share it with the world”.

As an established musician, Jones unlocked all the keys to being a successful artist. Let’s call them the three C’s: connection, content, and consistency. As someone who’s been through the come up before, Maddox Jones had to build a whole new connection with the listeners, and resisted taking any breaks. The plan still has not changed: “I’d like to focus on growing my fan base whilst at the same time being consistent with putting music out there. I love being busy with music and being creative”, he states.

The environment he grew up in can reason for Jones’s uncompromising hunger and drive. He explains: “I was brought up in a Christian community. We had no television or radio growing up and were only allowed to listen to Christian music. I started learning to play guitar at the age of 7, and my first songs were worship songs that I used to try and send to the worship leader to get them sung in church on Sundays. I almost got one song selected. I guess it was the equivalent of me sending my demo to Sony records; a warm-up as it were”.

As a teenager, Maddox Jones experienced a different level of thrill when listening to mainstream pop music. He elaborates on the circumstances that possibly made him respect the crat even more: “I got into pop music when I used to go to my friends house after school and tape the radio and snuggle the cassette into my room at home. This is where I got into hands like Cornershop and Oasis. Discovering music in my teens was so exciting as I’d spent my childhood not being able to listen to Glorious pop music; I was discovering it all for the first time; it was a hugely inspired time”.

Little did he know, after years of mastering the craft, he will be supporting the legends, the icons, on a stage not many get to perform on. Jones reminisces on his experience at the Reading & Leeds festival and Glastonbury: “It was so epic; a literal pinch me moment. We supported The Killers when they first came to England with their hit debut album, so it was small sold-out venues every night; we learned a lot from Brandon and the band. Playing Wembley with Placebo was a dream; it was over in a flash, and we made loads of new fans that night. Festivals are always fun; it’s great when you play them because you get a free ticket to see all your favourite bands,” he smiles cheekily.

Maddox Jones has experienced all the ins and outs of being a band member, but at the end of the day, it was just him, and that’s precisely what he wanted to explore more. Jones elaborates on why he chose the solo artist route after all: “Being a solo artist was a natural progression for me. I was In bands for years, but in the end, it was just me; it always came back to me and my songs, and so being solo just feels normal, really. Being solo means I get to have the final say on everything I do, but I do miss the camaraderie of being in a band sometimes, which is why I like to collaborate”.

Fast forward to 2020, Maddox Jones decides to turn all his early self-awakening moments into his debut project ‘Headspace’: “I’d only just gone solo, and I was all about writing honest lyrics and just being authentically me. I wanted to express where I was at as a person and an artist, and I think I did a pretty good job”. 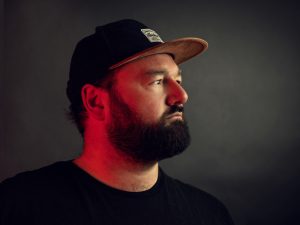 As a follow-up, Maddox Jones returned with ‘Can’t Wait For The Summer,’ which beautifully played with the nostalgia of old memories and anticipation for the freedom of summer: Jones speaks on the inspiration behind the track: “I wrote it in February 2021. I was moving house, and I found an old eight-track recorder that I used to use when I was a kid. It made me get all nostalgic, and I wrote a song that was about a time gone by where our ‘eyes wouldn’t be locked to a screen and our joy wouldn’t come from a meme’. When the lockdown was lifted, it became a bit of an anthem; everyone couldn’t wait for the summer”.

Not even a year later, Maddox Jones is eager to share more of his personal observations that might help others wanting to start over. Taken from his highly anticipated solo debut album ‘Believe It,’ ‘Ready To Be Better’ is a focus track that sets the entire record. Jones talks about the backstory to he wrote ‘Ready To Be Better’. “I remember picking up my guitar on New Years’ Eve 2020, and I was in a place where I was pretty much sick of my own s**t. I decided to write a song about exactly where I was at that time. I looked at the time on my phone, took a deep breath, and let the words pour out of me.

“It’s a quarter past 3 on New Year’s Eve, but it could be any day from the past few years I’m skating on ice, fighting my vices yeah.” I was partying too much and felt like I’d been pretty selfish in a lot of ways. It’s basically like an extrapolated version of waking up with a hangover saying, ‘I’m never drinking again”. I felt like I’d let people down, and I wanted to say sorry. I’ve been sitting on this song for a minute, but two years deep into Covid it feels relevant in a whole new way; I think we’re all ready to be better”.

‘Believe It’ is a collection of twelve tracks that are “mainly inspired by life, Jones’ friends with a sprinkle of Taylor Swift.’ He describes it as follows: “It’s conversational lyrics set to epic alt-pop production. It’s an emotional record, uplifting and joyful but with its reflective moments. It’s the best of Maddox at this time and I’m only just getting started”.

The prevailing themes are love, life, healing, betrayal, and self-care, throughout which Maddox Jones undertook a crash course on himself. The ‘Believe It’ project resembles a self-therapy session with a happy ending; Maddox Jones fell in love with himself; he explains: “The songs on my album are a snapshot of who I am and what I’ve been through over the past 2 years. It started with the end of a relationship, but what has followed has been a life-affirming journey of discovery where I’ve overcome fears, addictions, and fallen in love with myself”.

If you’re craving a dose of honest, unfiltered composition with raw lyrics and uplifting hooks, Maddox Jones’ newest album, ‘Believe It,’ is ready to help you out.