It was a massive night for music on Sunday at the Billboard Music Awards held at the MGM Grand Garden Arena in Las Vegas.

The likes of Becky G, Latto, Jazelle, Kali Uchis, Kendra Bailey and Teyana Taylor all celebrated in style, giving the fans stellar performances and outfits that wowed the crowds.

The 27-year-old Houston rapper had hearts racing in a stylishly revealing one-piece, as she showed off her signature dance skills for the crowd at the MGM Grand Garden Arena.

Her performance was just one of 16 during the three-hour telecast on NBC, which was also perhaps one of the most heavily censored of the night, with her first song Plan B filled with a number of words not suitable for broadcast television.

The rapper stepped out with a skimpy black one-piece with a number of cutouts in the front that showed off her luscious and one legs.

She also wore black heeled boots while she performed Plan B, and was joined by a number of backup dancers for her second song, Sweetest Pie.

She first performed Plan B, a song that many thought was a thinly-veiled diss track towards Torey Lanez, who allegedly shot her in the foot during a July 2020 altercation.

Another rising start that blew us away was Latto. The beauty wore a silver corset with push up bra that showed enough to keep her millions of fans wanting more. 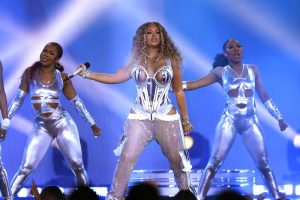 Travis Scott posed with Jazelle on stage as she had on a white bikini. When Jazelle arrived on the carpet, she had on a black crochet outfit that exposed her bottom. Not something we’d wear on the red carpet but it certainly worked for the catwalk queen. 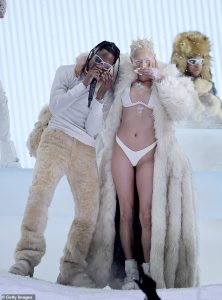 Becky G had on a black lace leotard with gloves and stockings that made her look ready for the cover of the Frederick’s of Hollywood catalog. 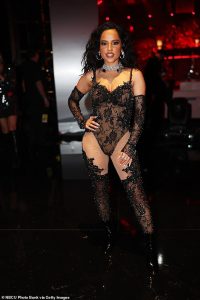 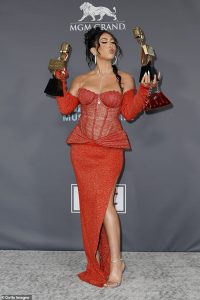 Kendra Bailey had on a beige bra top with her matching skirt as she posed with Bryson Tiller. 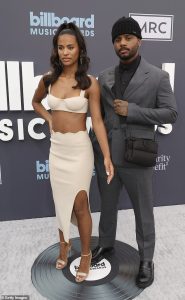 Mary J. Blige had on a bra with dress attached as she accepted the Icon Award onstage.

The annual ceremony returned to Las Vegas’ MGM Grand Garden Arena and this year half of the winners were unveiled on TikTok and the other half during a live broadcast on Peacock and NBC in the US. 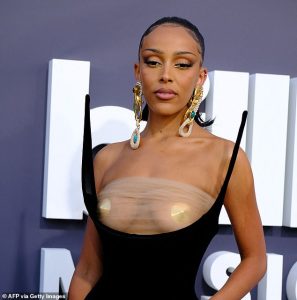 We are so happy for miss kitty Doja Cat. The intergalactic talent walked away with three prizes for Top R&B Artist, Top Viral, Song for ‘Kiss Me More’ with SZA and Top R B Female Artist.

The Weeknd was the most-nominated going into the ceremony, with 17 nods, but the ‘Blinding Lights’ hitmaker only walked away with a single prize for Top R&B Male Artist.

Before the ceremony started, organisers caused controversy by allowing country star Morgan Wallen to make an appearance despite him being banned last year for use of a racial slur.

Travis Scott also performed, six months after the Astroworld tragedy, which saw 10 people lose their lives in a crowd surge at the rapper’s festival.

Before the event, host Diddy addressed the booking of Morgan and Travis.

He said: ‘To have Morgan and Travis be able to come back and touch the stage again with the mindset of getting a second chance at life.

‘Everybody in the room is getting a second chance at life, you know, because we’re back outside with no masks on. We need love and I’m excited about celebrating that.’

It was an amazing night and Diddy did a great job. Congratulations to all winners and nominees.

Harper Starling: Whats In Your Bag?