Getting along without any significant mishaps is a miracle for any group of people. When you see a formation of five men, who consciously decide to spend every waking moment together, on the road, on the stage, in the studio, there is a sign of an extraordinary bond.

In this case of the Irish/American band We Are Messengers, it all started in Monaghan, Ireland, with a bunch of friends, including Darren Mulligan’s wife, Heidi and brother Mark Mulligan is the We Are Messengers frontman and tells how it all began: “We all loved music, storytelling and had this burning desire to bring hope to our communities, and that’s what we did for years. We packed our cars with gear, travelled all over the country, never made a penny, and we loved every second of it. In 2014, Word records in Nashville offered us a record deal, but only my wife and I could commit to making a move. That’s when We Are Messengers was born”.

As an Irish man, he explains his main intentions with songwriting: “To articulate the hard things and the beautiful things about life, our faith and put words to the feelings people cannot speak. We hope to bring comfort, conviction, and change in the best ways. We’re storytellers like every Irishman is. It’s worked for thousands of years, and we want to continue that ancient tradition”.

Mulligan looks up to other fellow formations with a cause and other amazing storytellers: “I grew up on Tom Petty, U2, Willie Nelson, and the heroes of grunge, soul music, and Rock N Roll. I guess that’s why our records are so eclectic. I admire bands that have a cause. I am addicted to Bruce Springsteen, and I think Foy Vance and Hozier are two of the greatest storytellers and artists we have”.

The We Are Messengers discography has proven to be arena-worthy and streamed worldwide. Amongst others, ‘Maybe It’s Ok’ from their 2020 album ‘Power’ makes up for more than 22 million streams. Mulligan speaks on the track’s message that inspires change: “We wanted to write a song that would allow people wrestling with the stigma of mental health to be able to tell their story. Getting well doesn’t happen in the dark; the first step to healing is always admitting you are hurting, and that is very difficult when people shame you into staying silent. It’s been beautiful watching people turn from suicide, self-harm, and addiction and get the help, counselling, and medical care they deserve all because they heard a song telling them it is ok not to be ok. Good art should inspire change, and I’m thankful this one is doing that”.

We Are Messengers – God You Are (American Tour Version)

‘Maybe It’s Ok’ hits closer to home for the band’s frontman than one might think: “I’ve struggled personally with depression, and this song has been an anthem for me and the ones I love. I wanted a song that allowed our audience room to breathe, princess, and speak their truth”.

The newest We Are Messengers record ‘Wholehearted’ features an anthemic ‘Come What May’ that came out of a place of uncertainty intended to comfort the broken spirits all around the world: “We wrote this one in the middle of Covid at a difficult time in the music industry where production teams, bus drivers, riggers, caterers and support teams were struggling to survive and feed their families. We tried to take care of our own as best we could, but it was scary and tough. We wanted this one to be an anthem reminding people that God would see us through no matter the circumstance. It’s such a cool moment in our show when people shake their fists at disappointment, loss, and heartache and shout Come What May into the face of fear and disappointment”.

The band carries a steady, strong messaging fuelled by Darren Mulligan’s powerful vocals that may soundtrack someone’s darkest of days. The true display of a band’s reach is their live shows. You are in for a whirlwind of emotions at the We Are Messengers concert. Mulligans elaborates: “Our live shows are messy. We don’t run off a setlist. We like to feel the room out and roll with the audience. We never want two shows to be the same. You can expect a lot of laughter, tears, jumping, singing, and shouting at a We Are Messengers show. It keeps everything fresh and feeling alive. They can expect most of the favourites, but we leave a lot of room for the unexpected, banter, dancing, and a whole lot of joy. Our hope is that people will leave better than when they walked through the doors”.

During these unprecedented times, it is important to stop and reflect on what you’ve accomplished for a second. For We Are Messengers, it accumulates to more than just one milestone. That’s exactly what Mulligan does: “It’s been a ridiculous journey; you couldn’t make it up. In my mid-twenties, I was falling apart, and now I’ve got this beautiful life, and we get to sing for and with thousands of people all across the world night after night. We’ll never take this for granted. There have been some cool moments, playing the Grand Ole Opry multiple times, the Forum in LA, every NBA arena in the USA, and sharing the stage with incredible artists, but for me, it’s watching the lights come on in people’s eyes that keeps me in love with this. I’m addicted to watching God use this music to transform lives”.

One of these milestones is the We Are Messengers performance at the iconic Red Rocks show: “It was unbelievable, I grew up loving U2 and their performance at red rocks is legendary. This venue is the most beautiful in the world, and playing for a sold-out crowd as the sunset over the Rockies was something I’d have never thought possible for a man who grew up in a tiny village in rural Ireland. In the bowels of the venue there’s a wall signed by Bob Dylan, Fleetwood Mac, and all of the greats. We added our name, too. We felt a little silly doing it next to these giants, but what a privilege. Life is funny and strange and often brutal, but there are moments like this of sweet unexpected relief and beauty that remind me of the kindness of God”. 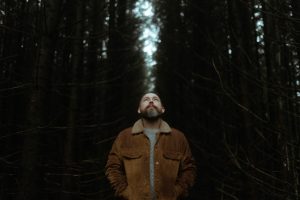 For the ‘Wholehearted’ project, Mulligan pushed for feeling organic and effortless: “I wanted this record to be really organic and for every sound, note and beat to feel unforced, almost effortless in the same way that the lyrics and melodies came together so naturally. Nothing about this record was a struggle; there’s no ego in it. We never wanted it to sound contemporary, cool, or current. We just wanted it to be what it wanted to be, which is essentially a record for regular people telling the story of our working-class lives through the lens of our faith in God, which has carried us through a couple of the strangest years in history”.

Touching upon the confused period of the past couple of years, the theme of ‘Wholehearted’ translates this darkness into a message of hope. Mulligan explains: “The record covers a lot of ground, life, death, and the awkward space in between. We wanted to remind people of the hope at the core of who we are and speak to tough subjects like mental health, isolation, doubt, and division while allowing people the opportunity to dance in the dark places of their lives. I once heard someone describe melancholy as the Irish happy of being sad, so we have this ability to laugh and cry in the same sentence, and I think that carried all the way through the record. Wholehearted is a project filled with laughter, love, faith, hope, joy, doubt, disappointment, loss, perseverance, potential, and mystery. We love that each song sounds like the story it’s telling”.

The lyrical background of ‘Wholehearted’ was built on effortless inspiration from various scenarios, hikes across Ireland, and back of tour buses, with nothing but pure honesty at its core. “It was pretty effortless. Some records feel like a grind, a hustle, almost like pushing a big creative rock up a muddy hill. This one felt easy; we worked hard like we always do, but the work was a joy. Songs were written in the back of tour busses, in the bowels of arenas across the USA, and in my backyard. Lyrics and melody came to us on hikes in the hills of Ireland, in studios by the beach in California, and are always rooted in personal experience. In the end, it just seemed to happen. We have an incredible group of writers and producers here in Nashville, and each of them bought into the sound that I had envisaged in my mind and crafted and tweaked it until each song sounded just like it should. Nothing fancy or bombastic, just honest, decent true sounding music. I’m completely delighted with how it turned out”.

Look up the newest album ‘Wholehearted’ by We Are Messengers, for anyone looking for a high-calibre dose of hope. It is out now.

Harper Starling: Whats In Your Bag?