Celebrating their tenth anniversary, the Australian brother duo for KING & COUNTRY released their fourth studio album, ‘What Are We Waiting For’, which asks forward-looking questions and analyses the mystery of our existence in the light of global warming suffering. 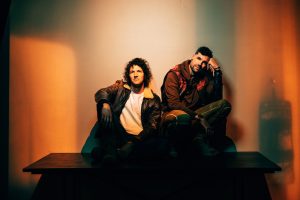 Born in Australia, brothers Joel and Luke Smallbone, later on, moved over to Nashville, Tennessee. Before becoming the pop-duo for KING & COUNTRY, Joel and Luke were quietly observing the fast-paced lifestyle of their dad as a concert promoter. In between bands coming through the house and looking at vinyl 45s of heavy metal bands, Joel recollects: “Music found us, more than we found Music. Our dad would often make all seven children sing songs to our guests as we said goodbye in Sydney and Brisbane, Australia. So I guess you could say we were born into a very musical landscape”.

At first, Joel and Luke’s dad pushed for their sibling collaboration. As much as the natural brother rivalry could’ve caused mishaps, Joel says creating Music brought them closer together: “Luke is my little brother who grew taller than me, was better at sports than me, and I believe he has a better voice than me. All the things that would create separation and disruptions for siblings. But, fun fact, it really was Music that brought us back together, and now we’re thick as thieves and really have a deep and great understanding of one another”.

From the long list of bands, Joel mentions U2’s Bono, who has shown as much credibility as talent. He explains: “The way that he has maintained his voice and credibility, the way he’s been honest with the world and himself with both his flaws and his art. He is someone that I feel has run the musical race well in a world that is fraught with family members and bandmates being estranged from one another. He and they have stayed in the fight”.

Before understanding their true calling in music creation, Joel speaks about the first song he’s written: “The first was a song called Little Things. So you have a “Smallbone” writing a song about “little things”. It was in the boy band era, and I did a music video with my brother Ben Smallbone, and it had cornrows and sunglasses, and dance moves all included. Not one of my crowning achievements as a musician, I must say!”.

Joel then puts in his words what for KING & COUNTRY represent beyond making Music: “More than that it is a large collaboration of not only direct family members, but also partners on the road, in the studio, and everywhere in between that allows this idea of theatrics, entertainment, hope, music, and spirituality in music to go forward.”

The core of their ethos is to engage with the spirituality of Music and propose deep-diving questions. Joel tries to summarise his outlook on things: “I believe that Music inherently is spiritual, no matter what the content, and not necessarily often even positive spiritually. There’s no other way I can describe the magical nature of the way it can change your mood, or spur you on that run, or change your mind about how you see yourself or God or someone else. So, inherently part of our hope is to engage with and align with that spirit and create Music that does reach deep into the realities, the tragedies, and the joys of life from our own experience and speak to what we see. And in many ways, ask questions about it all, and express the mystery of it.”

On their fourth studio album, ‘What Are We Waiting For?’, for KING & COUNTRY confront relevant issues and confirm the duo’s commitment to community, diversity, and family. The project’s lush, vivid, pop sound carries a common theme of ‘questions.’ Joel elaborates: “After my 30 years on this planet, we don’t have everything figured out. And if by asking the question, we leave space to learn and grow and see things through a different perspective. Maybe there’s a beauty inside that, and we can take the weight off our shoulders of having the whole thing figured out, so there’s a question coupled to move forward, if you will, that I think is key to this album”. 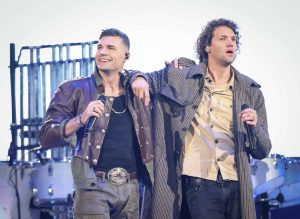 While describing the album as ‘universal, familiar and personal,’ Joel mentions the heartwarming ode to his parents, one of the singles’ Unsung Hero.’ “Luke and I have both been very fortunate to grow up in a home full of love from our parents from the top down–from our parents to the seven of us children. And often in this era of digesting and dissecting the “trauma of our past,” which I might add is very important. We can forget to honour and recognize those parents or parental figures in our lives that sacrifice so much. So this was a small way to honour them and felt important to include on this project as a whole”.

The main sentiment and heart of ‘What Are We Waiting For?’ lies within the global suffering that put us all in the same boat, every country, creed, and ethnicity. Joel speaks on how their new album takes time to highlight we’re all the same at the end of the day: “Instead of just sitting on our hands and pointing fingers, we actually get going and start moving and getting the blood flowing and not just tolerating each other, but show compassion and empathy, and because of this tragedy that we walk through that, we recognize that we are more similar than we are different”.

Looking back at their previous discography, for KING & COUNTRY understands their growth and the voice that can reach millions.

Instead of presenting statements, ‘What Are We Waiting For?’ puts forward compelling questions and contemplations, hoping for togetherness and living to the fullest despite the dismay. “I am most excited to present “Broken Halos” to the world. In live form, in music video form, and in audio form, I feel as though it pushes the band into a new chapter sonically and also speaks to the very heart of what we want this album to accomplish and what we want to speak to as a band”, Joel shares.

Tags: Australian music, broken halos, king and country, mogul, mogul magazine, what are we waiting for