Talent and relatability collide in the form of Cassa Jackson. Her star has been set to rise for many years now – beginning in the roots of her blossoming social media empire and slowly but surely spreading out into the wider world.

But it’s not every day that someone with a cool 160k on Tik Tok gets to support Lionel Richie. Whatever crowds all across the country are seeing – Cassa is currently supporting the almighty JLS on a nationwide tour – Lionel clearly saw it too.

“I was SO excited when I found out. I found out backstage at Birmingham and the news made me give my best performance ever!”

Cassa’s presence on the JLS tour has been a crowning jewel in her impressive career so far. Each night she’s taken to the stage in a different, show-stopping outfit, and posted endless behind the scenes content for us – including a photo with the band themselves. 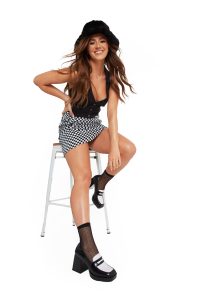 Now, Cassa looks forward to summer 2022, when she will be supporting the legend, Lionel Richie himself. “I am a huge Lionel fan so it’s an honour to be able to support him.”

“Going on tour with JLS has been so exciting, and definitely the biggest thing I’ve ever done.” But does she worry about getting carried away? “My friends and family have been absolutely amazing and will definitely always keep me grounded. My brother especially is really proud of what I’m doing but will always be the first to make jokes and keep me in my place!”

When we pried a little more about what a tour of this scale might look like, Cassa was happy to answer. “It’s a huge operation! There’s a load of people working behind the scenes to create such an awesome show. COVID has made things a bit more difficult this year but everyone is still having such a fab time backstage!”

Cassa’s social media (@cassajackson on Tik Tok and Instagram) has been telling us as much. Alongside costume changes and hair and makeup, it’s clear that Cassa has also been having the time of her life, constantly thanking the boys in the band for having her along for the ride, and snapping photos of special moments from the side of the stage.

“I just feel so lucky that I get to perform on such huge stages every night at the moment! I think back to what my younger self would think and it makes me so happy… I love seeing people’s faces in the crowds and seeing them wave and sing along to the songs is so special.”

Cassa’s focused on more than just herself and her career, though. As a young woman in the spotlight, she’s more than aware of the sort of role model she should be for other girls watching her. “I think strength is born out of vulnerability and hopefully girls watching me and listening to my songs will feel it’s a safe space to talk about their feelings.” How does she manage this and ensure it permeates her songwriting? “It’s important to stay true to yourself and I’m definitely always trying to be open and honest both in my songs and as a person.”

Due to the ongoing pandemic, Cassa hasn’t had many gigs for a while. Now that she’s been able to perform her EP live, we wanted to know if she’s been relating to the songs in a different way. “I wrote ‘I Don’t Like It When You Talk About Her’ and ‘Love’s A Losing Battle’ specifically for the tour as I wanted to sing upbeat songs that would get people dancing! The final song in my setlist is ‘Love’s a Losing Battle’ and I get everyone to turn their phone lights on – the lit up arena is a really beautiful sight.”

Cassa Jackson is poised at the edge of stardom – this is obvious from her growing popularity and attitude towards it. It’s an honour to catch her at this moment of suspension before shooting into the stratosphere.

Allegra: What’s in Your Bag?

By admin 3 weeks ago

The best of British innovation lands at Mobile World Congress 2022