“Beyonce is the reason I’m here today,” Allegra states proudly. It’s clear that this is more than just your average teenage dream, though – Allegra imitates Beyonce’s work ethic in both life and art, and carries herself with the poise and confidence of someone who knows she’s going to be a world-famous star. She’s humble, though; “I’m just a girl who has had a dream since she was little, dancing and singing in the mirror…”

With her latest single, ‘If You Wanna Love Me’, Allegra proves how far she’s come and how much she’s grown. Widening her influences and drawing on pop history, this new track comes hot on the heels of the neo-disco revival of 2020, and takes it one step further. “It’s 70s disco-vibes meets Studio 54 – I’ve never done anything like this before!”

But it’s not just musically speaking that Allegra is breaking boundaries and exploring new ideas – lyrically, as well, this new track marks a further step in the pop singer’s journey towards ultimate confidence in herself as a person and a musician. “I got tired of writing songs about heartbreak – wondering why people don’t love me… This song is very much about letting people know that they have to work to earn my love and attention. I think we can all relate to wanting that!”

While previous single ‘Used To Miss You’ sees Allegra dipping her toe into disco nostalgia, mixed in with some modern dance beats, ‘If You Wanna Love Me’ takes it one step further, diving fully into that late 70s sound. “I think both songs are empowering, but this one tells people that I’m not going to stick around or cry over someone. Those days are over!”

It’s a mixture of hard work ethic and pure talent that has Allegra following in the footsteps of her hero Beyonce. “I want to be known as the hardest working person in the room,” she says “I don’t want to be the kind of person where it’s all handed to me.” 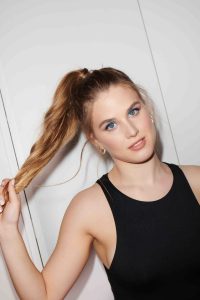 Allegra’s talents and projected trajectory have been noticed all around the globe and all around the industry. It was her potential that led her to collaborate with world renowned DJ, R3HAB. “The fact that I can say that I’ve worked with R3HAB is just crazy. I remember getting the call from my manager and thinking, wow, I’ve literally just been listening to his songs in the gym! I just felt so overwhelmed that he wanted to work with me! His belief in me drives me even more as an artist.”

When it comes to inspiration, the teenager is drawing from her own experiences in order to craft songs as unique and charismatic as she is herself. “It’s always important to me that I write about my own personal experiences. I want to be able to relate to my own music so that my fans can relate to me – if I don’t believe it how can anyone else? I always say that I put my heart on my sleeve when writing music. My friends can always tell when I send them new songs; they can really feel and understand the emotion I put into it.”

And when it comes to her fans, Allegra just wants them to know that they aren’t alone. “I want to make songs to dance to and songs for sitting alone in your room feeling sad. Emotions are a natural part of life, and it’s okay to feel them! I want people to know that we’re all human, we all go through ups and downs – so why not go through them together?”

Allegra’s single IF YOU WANNA LOVE ME is out now, with an EP to follow soon…

By admin 6 days ago

By admin 6 days ago