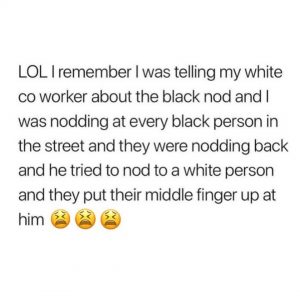 I recently came across a meme which had me in creases and inspired me to write this piece.

Although the meme itself was referring to the general acknowledgment of black folks by one another, I decided to use my own experiences to apply the same sentiment to black folks while travelling. If you’re a black person who has been abroad (or even if you haven’t), then you’ll know what I’m talking about when I say there is an instant recognition and acknowledgment when we come across one other in foreign places: that is, The Nod. Of course, the nod isn’t always necessarily a nod. It can be a nod, a smile, even a full-blown conversation if the situation allows (most likely in those places where black faces are particularly scarce). However it manifests itself, the black nod is a universally accepted expression of racial acknowledgement and solidarity.

I first became aware of this phenomenon when I was eighteen years old and visiting Prague for the first time with my dad and sister. My dad had taken us away as a gift: to me for completing my A levels, and to my sister for….well, nothing basically! Anyway, the three of us had just touched down in Prague’s Václav Havel Airport, when, after giving each other the nod, my dad stopped to talk to another black man. The way they were chit-chatting away like old friends, my sister and I obviously assumed that they knew each other, which wouldn’t have been surprising – my dad knows a lot of people all over the place. So, of course, when they were done talking and my sister and I asked who that man was, we were shocked and amused to discover that they didn’t know each other all, and had only stopped to talk to each other because they were both black. Neither one had said this, and neither one had to, but both instinctively understood and the interaction was completely genuine.

A year later, I decided to move to Lisbon, Portugal for a few months and was surprised, not only by the large number of black people living in that city, but more so by their willingness to interact with and help me for no other reason than that I was black. When living on the outskirts of Bangkok, an area where there were hardly any white people, let alone black ones, the few black faces I did see never passed by without some kind of mutual acknowledgement. Over the next ten-or-so years, I was fortunate enough to travel to a number of countries and while doing so encounter many other black travellers, and although I didn’t strike up conversations with as many as I would have liked, there was always the nod, or the less frequent smile, and even the occasional ‘hello’.

There have even been times when this form of ethnic-comradery has extended to other people of colour and non-black Africans, who also like to occasionally get in on the action: like the old Moroccan woman who invited me (and not my two white travel companions) into her flour mill to look around, take photos and drink tea; or the Egyptian guy on reception in a Dubai hotel who upgraded my Somali friend and my hotel room for a fraction of the price because we were “all African”.

By far the most comical thing about these interactions (as you might have gathered from the meme) is discussing it with white friends, whose usual responses are shock and disbelief, mingled with a kind of bewildered amusement. I can’t count the number of times that white friends have witnessed the nod and asked with confused tones “do you know her?” or “how do you know that guy”, only to be left bemused upon learning that I didn’t know them at all. One white friends even joked that if he tried this with a fellow white person while abroad, they would think he was crazy or possibly end up punching him, depending on the circumstances. Of course I couldn’t help but laugh as one more thing white-people-don’t-get-about-black-culture was added to the list.

Of course, my skin colour has afforded me some not-quite-so-pleasant experiences while travelling, particularly in those countries where black faces are scarce. Yet, the black nod and other such expressions of solidarity amongst the diaspora that say “I see you, fam. Keep doing you!”, no matter how brief, far outweigh the negative effects of ignorance and discrimination black travellers often face, and have come to be some of the most cherished memories of my travels.